If you have been following this blog closely, you may have already noticed that the frequency of new openATTIC releases and development activity in general has been slowing down over the course of the last 1.5 years.

We've been doing several bug fix releases of openATTIC 3.7 (and will continue to do so), but have not released a new major version with new features for quite some time. We also have not added support for Ceph "Mimic" or "Nautilus" (the current supported version of Ceph in openATTIC is "Luminous").

Instead, we have spent most of our energy in enhancing and improving the upstream Ceph Dashboard to become a full replacement for openATTIC. And we're happy to announce that we've reached feature parity (and much more) with openATTIC with the current Ceph Nautilus release! 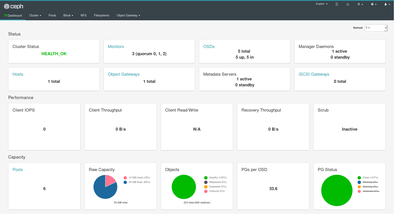 Ceph Dashboard has been developed nearly from scratch, and we have been able to address a number of shortcomings that we identified in the openATTIC architecture over the course of its life cycle. There's great value in being able to start over again and to rethink some previous design decisions; we're very grateful to the Ceph community for giving us this opportunity.

Moving our focus upstream also allowed us to gather a much larger developer community around our efforts, which helped tremendously in adding new features and improving the existing functionality in a very short period of time. I am very proud of what we have achieved over the course of the past 20 months and we are very thankful for all the contributions and feedback that we've received so far!

Working with the upstream Ceph project directly also has the additional benefit of being part of the software distribution "out of the box" - there's no need to install any additional software! This way, we're able to reach a much wider audience of users.

If you have been using openATTIC before, many parts of the Dashboard will likely look familiar to you. We hope that switching to this new web-based management tool will be seen as an improvement and step forward from a user perspective.

If you are missing anything in the Dashboard that openATTIC used to provide, please get in touch with us and let us know! We're very keen on getting feedback as well as contributions.