Despite the summer holidays, the openATTIC development team has been busy, adding new functionality and improving existing features. This release also includes code contributions created by developers not employed by it-novum, and we're very grateful for the support!

The openATTIC WebUI now supports multiple dashboards with custom widget configurations (e.g. title, position and size). The dashboard configuration is saved in the user's profile and will be restored upon the next login.

See the screenshots below for a preview: 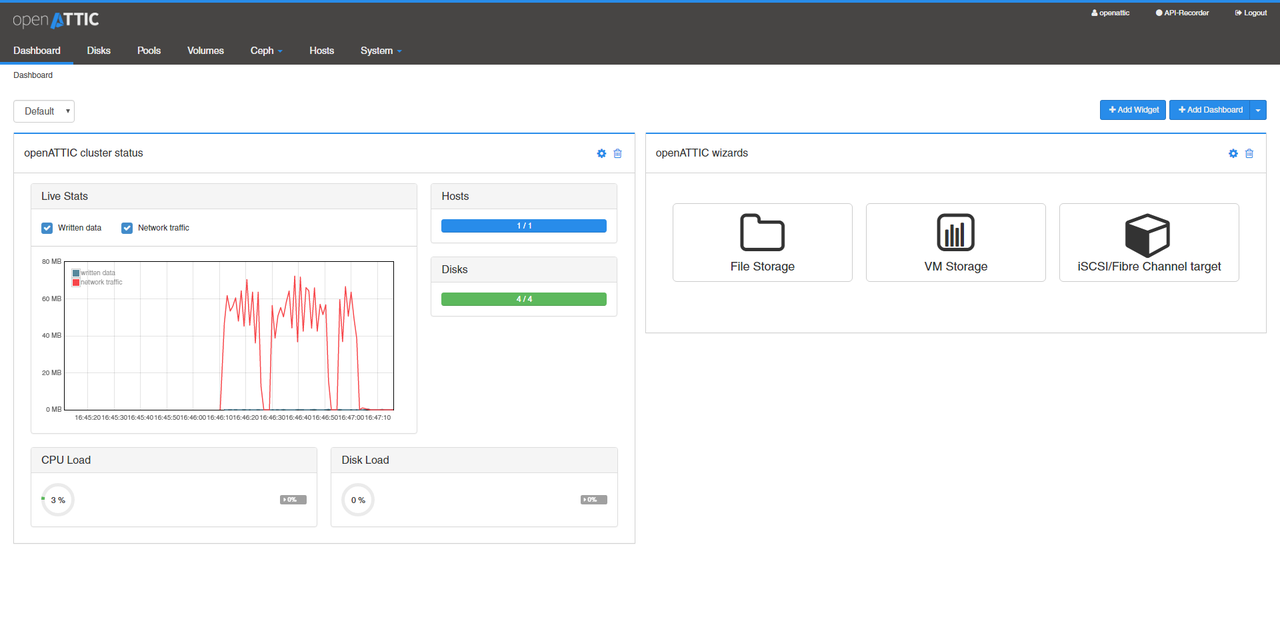 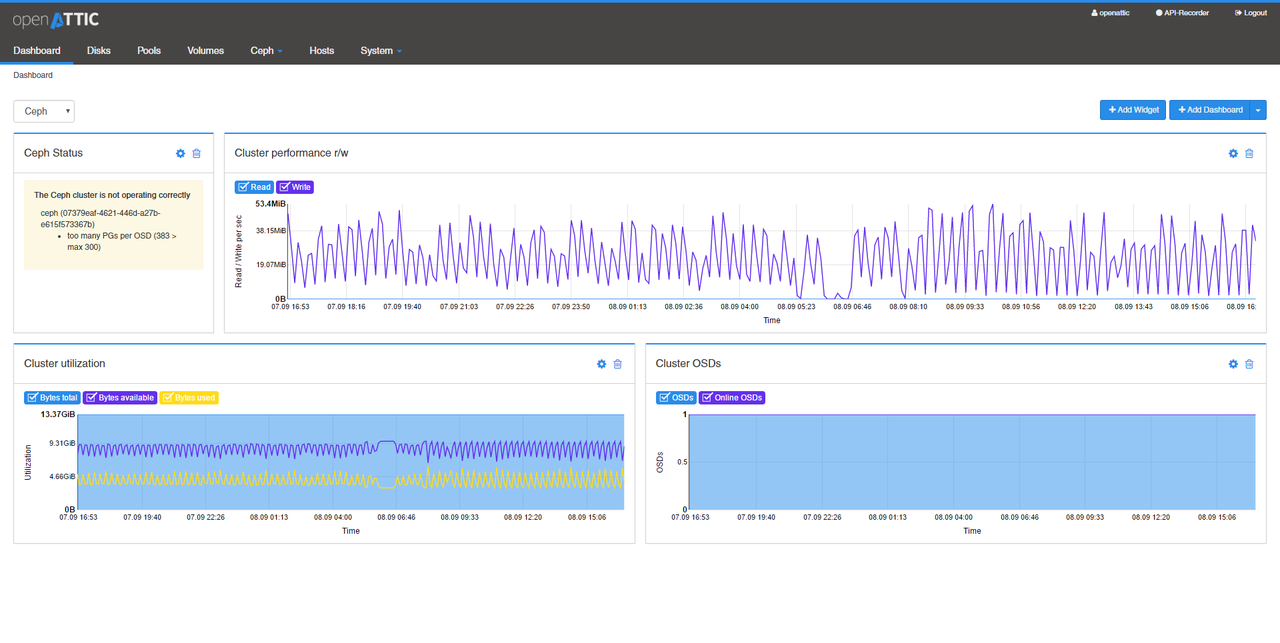 This release also adds extended Ceph pool management support: in addition to viewing existing pools, it's now possible to also create and delete Ceph pools via the WebUI, including support for both replicated and erasure-coded pools.

Yesterday a colleague migrated a physical machine into a kvm vm. Afterwards we wanted to manage the vm within virt-manager.

Acpid was installed, but nothing happend if we tried to shutdown or reboot the vm via acpi requests.

The problem was, that the migrated kvm vm still tought that it is a hardware instead of a vm. Therefore I changed the entry within the acpi events.

As an alternative you could purge and reinstall the acpid package.

Sometimes it's that easy :-)

About a week ago, the openATTIC team attended the annual Free and Open Source Conference (FrOSCon) in St. Augustin, Germany.

We had a booth in the exhibition area and we also gave an Overview talk about openATTIC 2.0 (in German), highlighting the latest changes and features as well as an outlook into future development plans.

The slides of this talk have now been uploaded to SlideShare, and a video recording of the presentation is available on YouTube and C3TV - enjoy!

In May, I posted an update on the state of the Ceph support in openATTIC.

With each release, we have added more Ceph management and monitoring functionality or refined existing features.

In this post, I'd like to summarize these changes as well as giving an update on what we're currently working on.

A month ago, I concluded my first year in the openATTIC team. How time flies when you're having fun!

One of my goals early on was to make openATTIC more open and accessible for community contributors and early adopters. There were a few barriers that had to be removed for this to happen.

In this post, I'd like to recapitulate some noteworthy changes that took place in the openATTIC project during the last 12 months. I also would like to summarize some highlights and achievements.

I realized that I speak about many of these when I give presentations or talk with people about openATTIC, but I think it makes sense to also put them in writing in this blog.

openATTIC 2.0.13 beta has been released

We're happy to announce the availability of openATTIC version 2.0.13!

In this release, we have made further improvements regarding the Ceph RBD handling in our user interface. We cleaned up many Ceph related detail-information tabs in order to display only useful data, especially on the Ceph RBD Page. We've also made some usability improvements on our dashboard - unfinished wizard steps have been removed and share paths will be set automatically at the end of the wizard instead of bothering the user with that. We also added a new dialog for creating new RBDs and integrated the functionality to delete RBDs within the UI. See our Sneak preview of additional Ceph RBD management functions for details.

The Nagios monitoring has been improved by adding performance data for Ceph pools. Also, we are constantly tracking the responsiveness of a Ceph cluster now.

In our Ceph-related backend part, we made some performance improvements, by running only the commands which are actually used by the REST API.

You may want to make/store the REST-API accessible on another host. In 2.0.13 it's possible to configure the url of the API globally. So, you don't need to customize every service which calls the api.

For those of you, who want to use openATTIC on a preconfigured VM, we're now providing VMs for KVM and VirtualBox, which can be found at apt.openattic.org/vms/.

If you already run the check_cephcluster Nagios plugin, you might receive the following error in your PNP4Nagios log (/var/log/pnp4nagios/perfdata.log):

This is because of the new parameter exec_time. In that case you will have to remove all existing RRD and XML files of your Ceph clusters. This can be done by running:

Note, After removing these files all collected performance data for your Ceph clusters so far are gone!

It's now possible to download and test openATTIC with already preconfigured virtual machines for KVM and VirtualBox.

There's Debian and Ubuntu available at the moment, but more coming soon.

See the documentation for further information:

As many of the videos on the openATTIC YouTube channel are quite dated, I recently started dabbling around with creating screen casts and slide casts, so we can work on providing more up to date content about openATTIC there.

The first public result is a slide cast that gives a quick overview about openATTIC 2.0, it's current features, ongoing development and future plans:

The upcoming 2.0.13 release will see a number of new Ceph management and monitoring features. While several of them aren't directly visible on the WebUI (yet), Stephan has just submitted a pull request (to be merged shortly) that gives you access to functionality that Sebastian (Wagner) added to the backend in version 2.0.12: this pull request will add first Ceph RBD management capabilities.

This slide show gives you a preview of the upcoming changes: 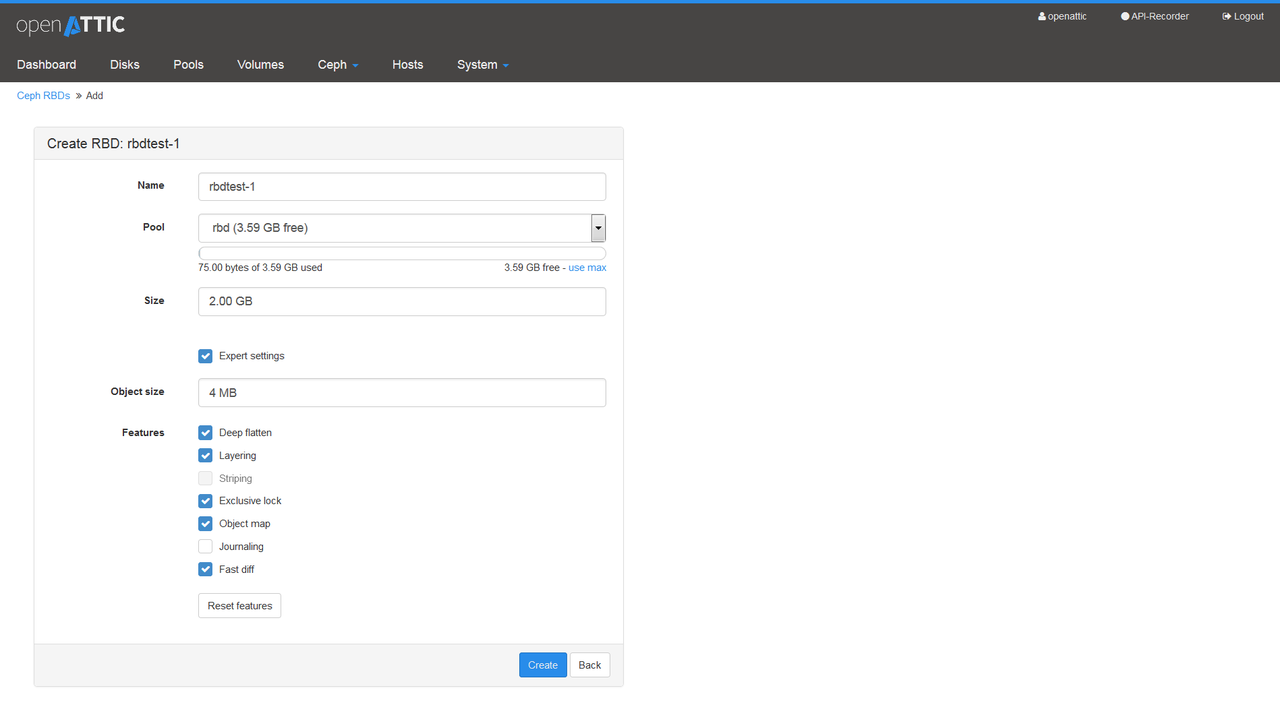 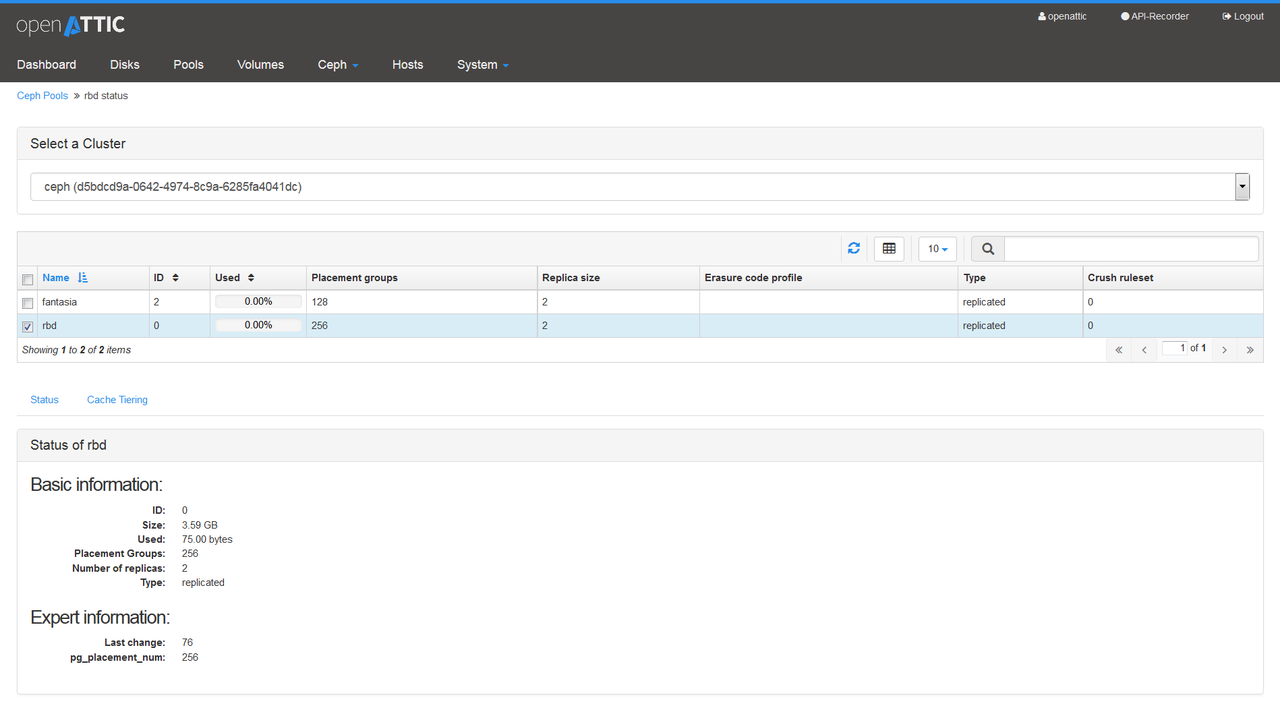 Today an old friend of mine wrote me a message and asked me if I could help him with his home nas. His problem was that his FreeNAS system could no longer mount and decrypt his disks. He wasn't quite familiar with the commandline and storage tools, so he asked me for help.

After 15 minutes of frustrating and testing with my first FreeBSD I found a solution. For everybody how wants toor needs to decrypt a Geli-encrypted ZFS volume on FreeNAS - here's what I did:

To decrypt the volumes - first find out which one is the geli crypted - just testing every fu**ing partition:

After that you have to import the zpool:

In our scenario it wasn't possible to mount the zfs volumes after the zpool import, because the default mountpath was wrong and the main path is read-only within FreeNAS. To change the default mount path from zfs:

That's it. Now we could access his data again. I learned alot and now waiting for my crate beer as a reward :-).