Version 3.6.2 is the second bugfix release of the 3.6 stable branch, containing fixes for multiple issues that were reported by users.

One new feature that we want to point out is the internationalization. openATTIC has been translated to Chinese and German to be present on other markets as well. We are working on other translations, for example Spanish. If you would like to see your native language as part of openATTIC get in touch with us and we guide you how you can contribute and help us with the translation. We also had some packaging changes: Due to new requirements, we now use _fillupdir RPM macro in our SUSE spec file.

As usual the release comes with several usability enhancements and security improvements. For example we improved the modal deletion dialog in general - instead of just entering "yes" when deleting an item, it is now required to enter the item name itself - so users do not accidentally remove the wrong item. Furthermore we fixed incorrect API endpoint URLs for RGW buckets. We also adapted/changed some test cases - e.g. e2e tests were converted into Angular unit tests.

About a month ago, we shared the news that we started working on a replacement for the Ceph dashboard, to set the stage for creating a full-fledged, built-in web-base management tool for Ceph.

We're happy to announce that we have now finalized the preparations for the initial pull request, which marks our first milestone in this venture: reaching feature parity with the existing dashboard.

In fact, compared to the dashboard shipped with Ceph Luminous, we already included a number of additional features that were added after the Luminous release and added a simple authentication mechanism.

We are very happy to announce the release of openATTIC version 2.0.21. This is mainly a bugfix release.

We would like to thank everyone who contributed to this release.

Your feedback, ideas and bug reports are very welcome. If you would like to get in touch with us, consider joining our openATTIC Users Google Group, visit our #openattic channel on irc.freenode.net or leave comments below this blog post.

See the list below for a more detailed change log and further references. The OP codes in brackets refer to individual Jira issues that provide additional details on each item. You can review these on our public Jira instance.

Last week someone asked on the ceph-users ML how to shutdown a Ceph cluster and I would like to summarize the steps that are neccessary to do that.

After maintenance just do everything mentioned above in reverse order.

The original Ceph Manager Dashboard that was introduced in Ceph "Luminous" started out as a simple, read-only view into various run-time information and performance data of a Ceph cluster, without authentication or any administrative functionality.

However, as it turns out, there is a growing demand for adding more web-based management capabilities, to make it easier for administrators that prefer a WebUI to manage Ceph over the command line. Sage Weil also touched upon this topic in the Ceph Developer monthly call in December and created an etherpad with some ideas for improvement. 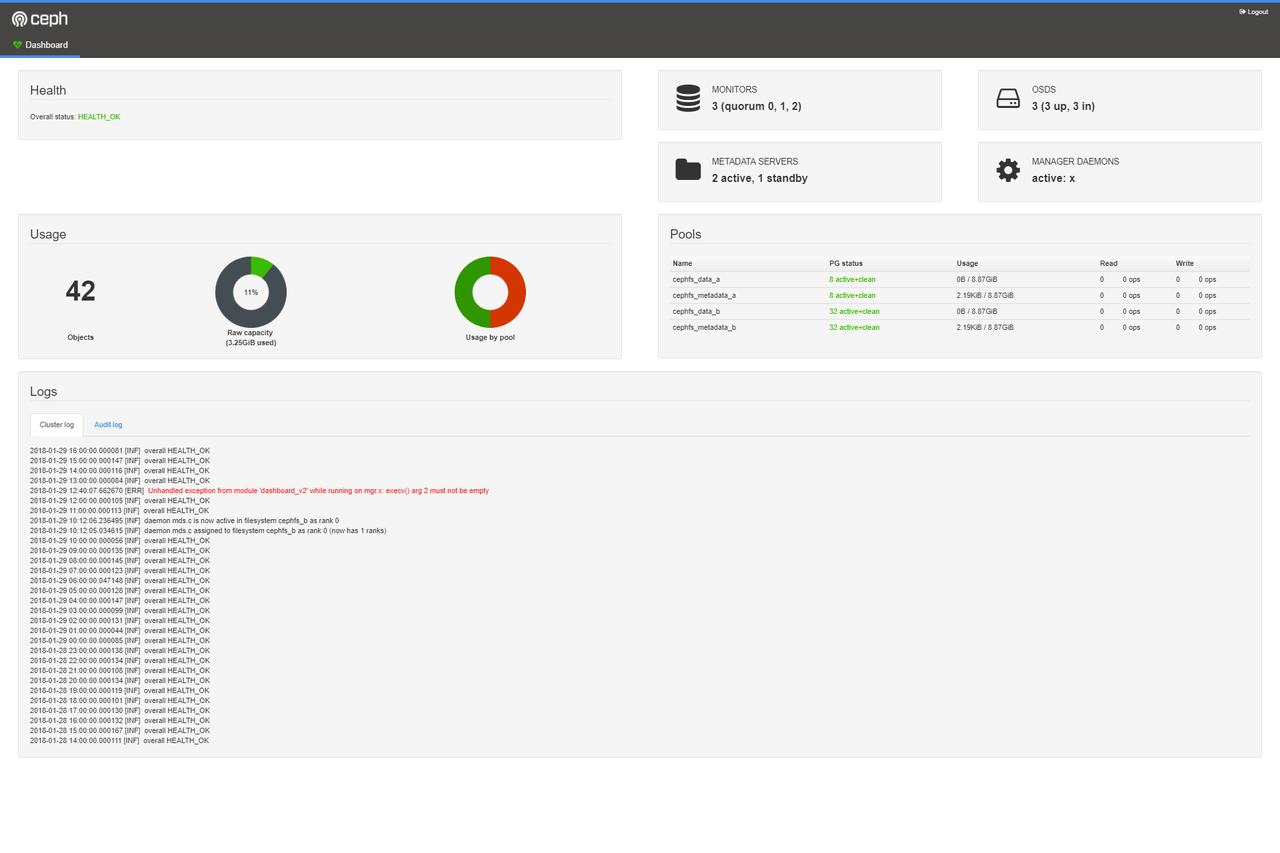 A preliminary screen shot of the Ceph health dashboard

After learning about this, we approached Sage and John Spray from the Ceph project and offered our help to implement the missing functionality. Based on our experiences in developing the Ceph support in openATTIC, we think we have a lot to offer in the form of code and experience in creating a Ceph administration and monitoring UI.